Laverne (Swenson) Gibbins, age 94, of Brainerd, passed away peacefully and with family on Tuesday, February 22, 2022, at Edgewood Vista Senior Living in Brainerd.

A memorial service will be held at 11:00 a.m. on Thursday, March 3, 2022, at Nelson – Doran Funeral Home in Brainerd. Reverend Mark Skinner of Bethlehem Lutheran Church will officiate. For those unable to attend in person, please visit Laverne’s page on Nelson-Doran Funeral Home’s website to participate in the live-stream, which can be viewed at any time.

Laverne was born August 25, 1927, in Fertile, MN the daughter of S. August and Cora (Jacobson) Swenson. Shortly after graduating from high school, Laverne married Paul Linn whom she had met as a pen pal during WWII. Paul was a mechanic and traveling agriculture pilot, and Laverne raised their three children Coleen, Michael, and Lesley making their home near Crookston, MN. Laverne was widowed in a crop-dusting accident and moved the children to California for a short time. She returned to Minnesota and married Donald Gibbins where DJ, her fourth child, was born. When good friends and neighbors on Lake Hubert passed away Laverne graciously brought their teenage son, Steven Park, to live within her family. With Don and DJ, she moved frequently to follow business opportunities including many years in Arizona. Most recently, Laverne split her time living with her children and eventually settled into an apartment at Edgewood Vista in Brainerd.

Laverne was an avid reader all her life; usually reading three books at a time. She liked fishing, gardening, and cooking with spicy foods. Her artistic endeavors included sewing and other crafts. Although she looked forward to holiday gatherings with family and friends, she was just as content to spend time on her own. She was always kind-hearted, down to earth, and forever fashionable. 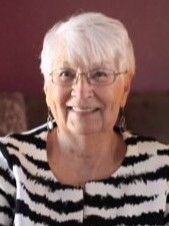