Richard (“Dick”) James Keller of Baxter Minnesota age 91, passed away on April 14, 2022. He was born on October 4, 1930 in the town of Western, Nebraska, son of Arthur and Pearl Keller. He moved with his family to Janesville Wisconsin where he grew up attending and graduating from high school in 1948. He attended Indiana Central College and then graduated from Bob Jones University and St. Paul Bible College in 1955. He was ordained to the ministry in 1958 under the Christian and Missionary Alliance Church. On June 5, 1954 Richard married Florence Voth and together they served churches in St. Croix Falls Wisconsin, Remer Minnesota, Wilmot, South Dakota and Nisswa, Minnesota. He also served as a substitute pastor in the Brainerd Lakes area for many years. His ministry was a continued blessing to those he served both in his messages and with his rich tenor voice preaching and singing as he faithfully served his Lord and Master Jesus Christ.

After his retirement from the ministry in 1976, he sold memorial monuments for Little Falls Granite Works for 20 years. He had a continued spiritual ministry to many families in the area with his work. Richard and Florence enjoyed traveling throughout the United States and many countries in Europe and going on cruises with family and friends. They especially loved visiting their daughter and son and grandchildren in Europe and California. Richard love to fish, play golf and best of all lead singing in the church choir. Richard will be deeply missed by his wife of 67 1/2 years Florence, his daughter Kathryn, his son, Keith, son-in-law Steve Biddle, daughter-in-law Iva Keller, and his 4 grandchildren; Miranda, Craig, Mark and Eric. He was preceded in death by his parents, one brother Raymond and five sisters; Doris Bloedel, Jeanette Heenan, Venitia Stanley, Joanne Beldin and Neva Hockerman.

Services will be held at the Halvorson Taylor Life Events Center in Brainerd on April 23, 2022 at 12:00 pm. Pastor Dean Erickson and local Pastor Mark Ford will officiate. Family and friends are invited to attend.

Interment will be at the Baxter Cemetery after a luncheon immediately following the service. 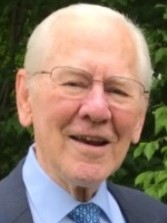